The Resurrection of the QR Code

When QR (Quick Response) codes initially appeared, the prospect of bridging offline and online marketing was exciting. However, like any bridge, it’s only worth having if people actually use it, and that was the issue – adoption was not at the levels that were anticipated. A research study in 2013 disclosed just 21% of US mobile users scanned a code and only 2% said they did so often. A 2012 study said 97% of mobile users didn’t know what a QR code was.

While QR code usage languished in the US, it took off in Asia. Scannable codes were popular in Japan starting in 2002 even when mobile access to the internet was poor. Handset manufacturers, publishers, and advertisers jumped on board to push adoption. Meanwhile, 2 Chinese digital-payment platforms, WeChat Pay and Alibaba’s Alipay, enabled contactless payments by scanning codes.

Desperate to get into the Chinese market, Apple and other handset manufacturers jumped on the Asia bandwagon to include QR code recognition in their smartphone’s native camera function. When launched in September of 2017, IOS 11 gave everyone an active QR code reader in their camera app. Prior to that, Google released a new version of Chrome with built-in QR code recognition.

Finally, thanks to the widespread adoption in Asia, the major players have jumped on board to promote adoption of QR Codes by filling the single most important impediment to usage – native QR code recognition on smartphones.

No longer is it necessary to download a third party app (some of which have been accused of carrying malware). No need to open a separate application every time you want to scan a QR code. What smartphone user today doesn’t have one-click access to their camera and complete familiarity with how to use it? With the removal of the clunky extra steps required in the past to scan a QR code, adoption has increased dramatically.

Other major players have also joined. In 2017 Pinterest introduced Pincodes, and Facebook starting offering Messenger Codes, and now, Facebook has a QR code option for pages to provide a number of functions including:

QR Codes are used on many other platforms such as: 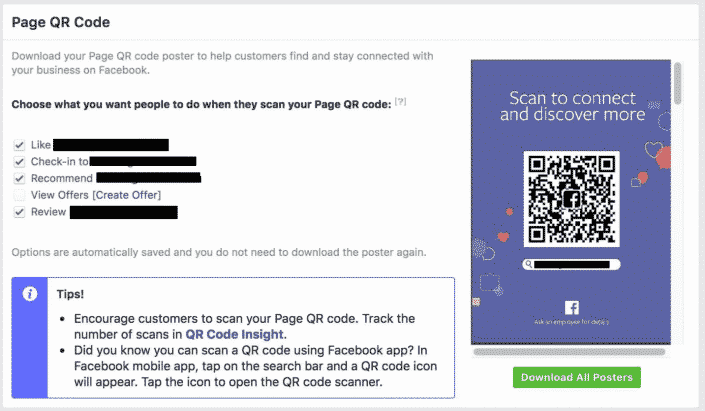 Why did QR Codes Fail?

The first two are now solved. QR Code readers are shipped with Apple and Android phones so users do not need a third party application, and the vast majority of websites are mobile friendly. The third reason is not unique to QR Codes. It is ubiquitous to the online world where content needs to be relevant and engaging and deliver a benefit to the customer.

With the likes of Apple, Amazon, Facebook, Google, Twitter and major retailers embracing QR codes, could 2019 be the comeback year for a technology that failed miserably in the US after its introduction? 2018 usage statistics show a resurgence.

According to Juniper Research estimates, the number of QR coupons redeemed via mobile will reach 5.3 billion by 2022, a 4X increase from 2017. They also expect mobile-enabled loyalty cards to double from 2 billion in 2017 to nearly 4 billion by 2022.

Seems like a safe bet that the second coming of QR Codes is upon us and now is the time for small businesses to jump on the bandwagon with the big players. In a future post, I’ll discuss the benefits of QR codes and how to incorporate them into your marketing strategy. Remember though, QR Codes are just like websites — if they don't provide a benefit to your customers, they won't use them no matter how easy they are to use.